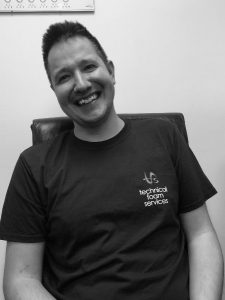 Continuing our series on looking at what it feels like to work for Technical Foam Services, the UK’s best and most trusted foam conversion business (well, in our opinion anyway), Andy Goram from Bizjuicer, sat down Tom Wallace’s engineering protege, Andrzej Rudzinski.

I’m met with a beaming smile and an enthusiastic apology for being late for our chat.  “I’m so sorry, it’s just gone bloody crazy today! You wouldn’t believe it!” he says.  There’s absolutely no apology needed.  The foam converter needs Andrzej’s unique skills at breathing life into heavy machinery, far more than it needs my ability to consume coffee, talk to people, and write stories right now.

Like lots of other people I’ve met during my time working with Corby-based TFS, Andrzej immediately strikes me as a “nice” person.  I know some people hate that word, but it’s so apt in this case.  Do you know when you get a warm feeling when you meet someone good?  Well, that’s the feeling I get when I meet so many of this team, and Andrzej is no exception.

He’s worked for the east midlands foam converter for 14 years now, but the story of how he got here is an interesting one.  Andrzej grew up on a farm in Poland.  As a kid, he loved to build stuff. As he got older, being on the farm, he was always helping his Dad fix the tools and machines and re-purposing seemingly broken bits of kit into new, useful items.  This fascination with making one thing out of another has stuck in his core and now forms the backdrop to what he does now.  But it wasn’t always going to be that way.

After finishing High School, he went to college to study, because that’s what his friends were doing.  He didn’t really have any great plan and chose to study Economics, with a side dish of Data & IT.  On finishing that he realised pretty quickly that Poland wasn’t going to present him with lots of opportunities to use his new qualifications.  Whilst his friends embarked on a period of partying and cutting loose, Andrzej was thinking further ahead and about setting up a better life and future.  So, in 2005 he came to the UK,  Through a family friend, he was heading to London to join a hand car-wash crew.  But on arrival, his ability to understand more English than his colleagues, saw him diverted to a different car cleaning crew up in Corby.

“People who complain about hard work, don’t know hard work until they’ve worked for a hand car-cleaning business,” proclaims Andrzej.  “It’s the hardest work I’ve ever done.” He describes long days, hard physical labour, poor conditions 7 days a week.  “If you didn’t eat breakfast on a sunny day, you wouldn’t be eating until much later that night, because the trail of cars never stops.”  Andrzej lasted 2 months before he decided he needed to find something else.  A friend at the car wash introduced him to a job agency and it’s there his career took a different turn. 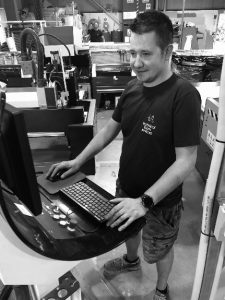 There followed a couple of years where a succession of short-term contract work in a variety of Corby’s factories is what filled Andrzej’s working days.  From making sausages to electrical components, he fashioned a working career on the production floor.  From his time arriving at the car wash and through these two years, he built up a strong friendship with Przemyslaw Gorecki, the now Operations Manager at TFS.  During the two years, the friends looked out for each other. Przemyslaw has secured a job with TFS and he encouraged Andrzej to get a job with the burgeoning foam company who he described as “Clever guys, who are nice and know what they are doing.”  So, in 2007 Andrzej joined TFS on the shop floor.

It was the early days of TFS and things were quite tight.  “I remember being told that they couldn’t afford to keep me on at one point.  It was really sad, but I told them not to worry, I’d find work somewhere, but if they were able to recruit again, please let me know, as I wanted to work there,” he tells me.  After a short hiatus, things picked up for TFS and Andrzej came back.  It wasn’t long before Andrzej’s ingenuity was spotted and he quickly progressed from production operative to setting up machines (and secretly fixing them), eventually, he was promoted to Supervisor.  But, he struggled to deal with the man-management side of the job and asked to go back on the floor.

The management team at the time recognised that Andrzej had a knack with machines, and rather than put him back on the floor, moved him to the engineering department under the watchful eye of Tom Wallace.  It is there that Andrzej has flourished and found his home.  “Initially I worked on the computer-side of the machines, setting them and programming them, and looking after the Flash Cutters and Laser machines. Fixing stuff is just normal to me. I guess that comes from the farm days.”

Andrzej’s ability to think differently is in big demand at TFS. Whether it’s coming up with the process to cut out a wearable foam suit, or upping productivity by tinkering with a machine to take 5 sheets, rather than 1, Andrzej’s in his element.

“The best, most exciting thing about this job, is that I feel like a creator.  I have to think and I get to solve problems.  I love that!”  “There’s no prouder feeling than when you’ve solved a puzzle, made something to do the job and it works.”

I ask Andrzej what it’s like working with someone as experienced at Tom.  “He’s so experienced.  It’s funny because when I explain my solution to a problem, it’s usually quite complicated.  When Tom does it, he makes it so much simpler.”  “He’ll often say, “try it your way”, and he’ll have a little smile on his face.  But at least he lets me try and I can learn from my mistakes.” 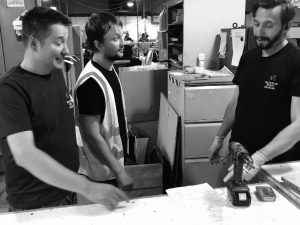 Andrzej tells me the future of this company lies in technology, which is something he’s clearly passionate about.  “I want to focus on and learn more about technology, computers, controllers, and programming.  That’s what will help us going forwards and add more life to our machines and enable us to do more things, more efficiently in the future.”  He openly tells me that he loves working at TFS and how much he knows about the products, the machines, and the company, and that he’d love to be the Engineering Manager in the future.

I ask him a final question to tell me what the best thing about his job is.  He thinks for a minute, then smiles.  “The best thing is that I’m always learning.”

You know, I work with lots of companies where employees are happy and engaged.  But the additional piece which helps employees thrive is very often that sense of genuine personal development and learning that gives them that internal sense of achievement and satisfaction.  It’s something you get a really strong sense of with the people at TFS, and Andrzej is a great example of that. I think he and TFS are going to achieve great things in the future. I can’t wait to see what that looks like.