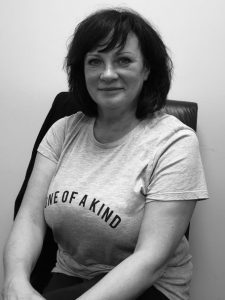 Continuing our series on looking at what it feels like to work for Technical Foam Services, the UK’s best and most trusted foam conversion business (well, in our opinion anyway), Andy Goram from Bizjuicer, sat down with Production Assistant, Asta Simoneliene.

I’m greeted by another warm smile and bright eyes, which is becoming the norm when I sit down with guys from TFS.  I notice that Asta is wearing a T-Shirt that says “One Of A Kind” on it and I wonder whether that’s a clue to what I’m about to hear.  It turns out it was quite prophetic.  This is not another story of an eastern European lady from a small village, struggling to find work at home so coming to the UK to get work.  It is though a story of dealing with and in some sense, encouraging change.

Our conversation starts with my inability to spell Asta’s surname.  After repeating the letters for about the 5th time, Asta picks up my pen and writes it out for me.  She tells me not to feel bad and smiles. “My last boss in Lithuania, he was Danish, used to say, “I know how to say your name – it’s Simon-la la la!” and she laughs. Asta studied Leather Manufacturing at the University of Technology in Lithuania, before working in Human Resources for a huge shoe factory, employing over 2000 people for 13 years.  It’s here, in this international business, working with Germans, Russians, Dutch and Danish colleagues, that Asta got a good grip on the English language. It’s something that’s obviously really helped in coming to the UK, but as we all know, in some places in the UK it’s still difficult to understand what some people are saying.

Asta laughs.  “Let me tell you a story about that”, she says.  She goes on to tell me about a trip to Edinburgh with her boyfriend a few years ago.  They were in a bar, having a great time with the locals, but the time came to visit the loo.  Asta made her way around the bar and found the door to the toilet.  As she pushed it open she was met by the figure of a tall man stood in the doorway.  She looked aghast at him and said “You should not be in here.”  The guy looked down at her and said, “You need sex.”  Asta couldn’t believe what she was hearing.  Visibly shocked she shouted back at the guy declining the offer and that she just wanted to use the loo.  The man stood his ground, bent down, and said in Asta’s ear “Unisex. This toilet is Unisex, darlin’.”

Anyway, I digress.  Asta eventually left the comfortable surroundings of the shoe factory job, amidst an economic crisis which meant the company wasn’t able to pay wages.  With a young son to support she jumped ship to another business where she moved from HR and into Production.  Unafraid of change, a theme that stays with Asta throughout her career, she held down various managerial and supervisory roles there.  But in 2013, at the age of 49, with her son now supporting himself, she felt it was time to do something for herself. After talking to some friends she headed for Corby, where she had contacts and set about building a different life in the UK, just for a bit, to see if she liked it. 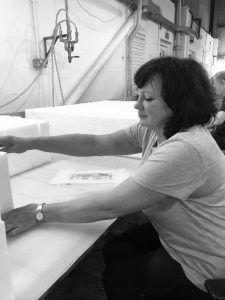 It didn’t get off to the greatest start.  The first role in a food factory lasted just 5 days. The monotony of the production line and the atmosphere in the factory quickly highlighted this was not for her.  Fortunately, she landed a role in a Greetings Card business, which lasted for a few months.  But in 2014 the employment agency contacted Asta about a production role at TFS.  An opportunity she took and looking back, is so glad she did.  “I’d never worked with Foam before, so it was good to do something new.  But, from day one, it just felt very different from my other factory, production roles.  The people were very helpful and you could immediately sense a more positive atmosphere.”

It’s been 6 years now that Asta has worked for TFS and she’s seen a lot of change in that time.  “When I started there were just 20 people and one shift.  Now we have nearly 50 people, I think, and 2 shifts. It’s so much busier now.”  I ask Asta how come she’s stayed here for 6 years on production when she didn’t like her previous experiences. “There are so many new and different products that we get to work with.  That keeps it interesting.  I like the variety.  You don’t just stand in the line and do the same things every day.  They move you around a lot.  It’s much better for your brain that way!” she jokes.

“Is it just the variety that’s kept you here?”, I ask. “No. You are treated like a person here, not just a worker.  Duncan really looks after you.  We’ve been given the chance to gain new experiences.  He’s laid on English lessons, trips to London and we even had a Spa Day.”  She sighs and wanders off mentally for a second.  “That was so good”, she says.  But she goes on to tell me that whilst these things are very nice, it is the fact that whoever you are, if you have a problem, you can speak to Duncan and he’ll listen to you and help you.  There’s a real, genuine tone in Asta’s voice as she tells me this and she looks at me deep in the eyes.  I can sense that Asta has had something happen which has meant she knows this happens first-hand.

It’s a tough thing to hear (and to write about) but Asta shares with me that 18 months ago, whilst on holiday, she received a devastating phone call to say that her boyfriend had died of a heart attack at home, alone.  “It was a huge moment in my life. But I’m ok now.  But it makes you think about what’s important. I also got so much support from everyone at TFS, it helped me get through it.” She explains that she also took on extra work, so she wasn’t sat around on her own “thinking about things.” She’s at pains to tell me she is ok now, but it’s clearly had a big impact on her life. 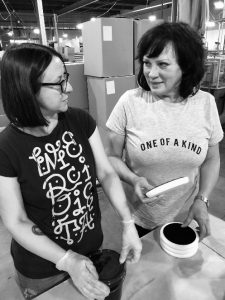 Asta says that the event has triggered her big decision to go back home to Lithuania.  “It’s taken me a year, or so, to make the decision“, she says.  Whilst she has friends here, she feels alone and isolated from her friends and family.  She would regularly travel back to Lithuania to see them but now wants to be closer to them.  “It’s taught me that you can’t wait and plan too far in the future.  You never know what’s going to happen.  Things can literally change in a heartbeat.  I haven’t been afraid of change before and I’m not going to start now.” I’m looking forward to going back home.  It’ll be different at first,  going back to a busy city, like Kaunas, compared to Corby.  But, the time’s right, and I’m excited about what will happen next.”

Asta tells me that TFS has been great in supporting her decision to go back home.  “I’ll really miss the people”, she says, “I hope they’ll miss me too”, she laughs.  I know for a fact that they will.  Duncan once told me, “Once a member of the TFS family, you’re always a member of the TFS family.”  I say this to Asta.  She holds her heart and says, “And that’s what it feels like. It makes you feel good to know that.”  We all wish Asta the very best as she gets ready for the second time to go home (Covid-19 stopped the first attempt!) and are all interested to see what she does next.