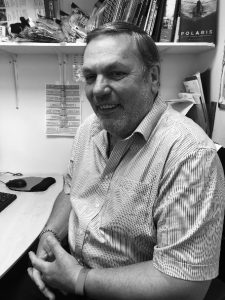 Continuing our series on looking at what it feels like to work for Technical Foam Services, the UK’s best and most trusted foam conversion business (well, in our opinion anyway), Andy Goram from Bizjuicer, sat down with the guy in charge of Health, Safety & Quality, David Hood.

“I’m Scottish”, are the first words to come from David as we sit down over a cup of tea.  It feels like a rather combative start to the conversation, but I soon realise as David’s story unfolds, it’s because he doesn’t have a Scottish accent, but is proud of his geographical roots and that most people don’t believe it… that he’s from Scotland, that is, not that he’s proud of that!

He was born in Edinburgh, to an English Dad who was a sailor in the Royal Navy; a path that little did “wee David” know he would tread in the years to come.  He moved down to England in 1965, at the age of 8, as his father looked for work and ended up living near Lichfield, though his Mum was initially all for turning back around and going back to Scotland before they moved to and settled in the village of Alrewas.  As a youth, he was a keen sportsman and had trials and played in goal for Derby and Burton Albion.  This may well be the first inkling we have that “safe hands” will play a major role in David’s career through the years.

At 16 he left school to become an apprentice engineer, studying 1 day a week at Tamworth college, but a serious leg-break put a dent in his plans and after a long lay-off decided to pursue a different route, rather than have to start the apprenticeship again, and he became a firefighter, twice.  Let me explain. In ’74 he joined the Fire Brigade and on passing his tests and exams got his first posting to Burton Firestation.  However, it was at this point that the brigade realised he was actually too young at 17 to be a firefighter, so he was put on extended leave until he reached his 18th birthday. At the point, for the second time, he became a fully-fledged firefighter.

His first major shout saw him have to rescue a man who was crushed in his lorry cab.  Being the smallest, skinniest firefighter in the crew, he was the one sent in through the crumpled cab window to administer first aid and keep him alive, whilst the rest tried to free him from the wreckage. On being extricated from the twisted metal, the driver called for “the little fireman” to thank him for keeping him alive.  Unfortunately, his injuries were so severe that the man died a couple of weeks later, but David was touched by the warmth and kindness his family showed him for all his efforts to save and protect their kin.  Another momentous event in his firefighting career was the general strike in 1977, which eventually forced him out of the Service, an into another “protection” role, this time keeping the nation safe as part of the Royal Navy. 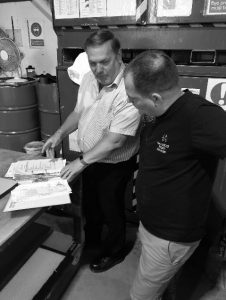 Despite his initial intentions to follow in his Dad’s footsteps and see the world from the deck of big ships, he became a submariner.  Ongoing through the assessment centre, he saw the depth test as an opportunity to get out of being a submariner.  After being advised that the trainees should raise their hand if they felt dizzy, or got pains in their ears or head as the sub submerged, after what David thought was an age he grimaced and raised his hand.  Upon this, the Instructor pointed out to David that the sub had travelled a full 6 inches down at this point, and that he’d probably been in deeper water the last time he’d had a bath.  David decided just to get on with it and passed all the tests and got his first posting on HMS renown, a Polaris sub.  He proudly shows me his “Dolphins”.  It’s a Navy tattoo of a Navy badge framed by a couple of diving dolphins. This is the signal of being a “trusted” member of the crew.  Someone who is trusted with the key duties onboard and responsible for the safety and protection of the rest of the crew.  One of his main duties was to shut the main hatch on the sub.  If you’ve ever had the feeling that you’ve left the door open when you left the house, times that by 1000 in terms of responsibility and consequence on a Polaris sub.  The theme of taking responsibility for people’s safety continues.

David left the Royal Navy, with a medal, in 1987 to start a family and a new career.  He became a Telex (younger readers may need to Google what this is – but it’s a sort of communication device, a bit like a fax.  Oh wait!  You might need to look that up to…) Communicator for the Swiss Bank Corporation, in London.  But a change in shifts left him with reduced earning opportunities and he was asked to consider whether he could add any other value to the business.  He struck upon the idea of designing new safety processes, something lacking at the time, and this serendipitous timing coincided with a conversation at the Board on that very subject.  This became David’s new life, officially sorting out the health and safety of his colleagues.  But long hours and a stressful environment took its toll on David and a heart attack forced him to reconsider his career again.

In 1998 he set up his own business consulting on all things Health & Safety for a portfolio of clients.  It was in 2009 that he first met the team at TFS.  A short-term contract, one day a week, initially focused on building on the health and safety foundations in existence, turned into the full-time role he has today.  During that time he’s been responsible for the design and implementation of both the ISO 14001 and 45001, where today David now proudly boasts that TFS is fully compliant with a comprehensive set of systems and processes to keep people and the environment safe and well, and the quality top-notch.

One of the things I’ve noticed in my time with TFS is how everyone talks about the “relaxed” atmosphere on the factory floor.  The fact that people are allowed to listen to music here, seems to be a big thing for the team when they compare it to other places they’ve worked.  I ask David, how you balance that with the whole safety at work thing.  “We have an excellent safety record here.  I can only recall 4 issues in 11 years.” When he tells me about the “issues”, they all seem to involve pulled muscles or something similar, which seem pretty-minor to me. “But I’m a great believer in the old adage -whistle while you work-.  I think being able to listen to music at your workstation it makes for a better working environment, and is a just as a good a way of blocking out machine noises, than just wearing ear-defenders.”  This seemingly different approach to running the factory, compared to others, is well appreciated by the employees and looks to have fostered a very positive attitude to implementing health, safety, and quality processes at the same time. 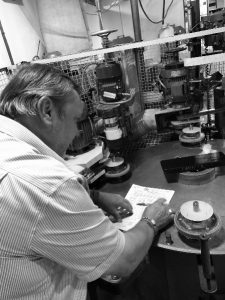 “It’s all part of our ethos here,” David says.  “Treat people decently and they’ll do a decent job.”  “We now have a lot more people, more machines, more processes than ever before, which all means more assessments, audits, and training to sort out.  But the great thing here is that it’s a team effort.  I get great support from Duncan and my colleagues.

When I ask David about the future and what’s next for him and TFS, he says he’s starting to think about retirement, or at least easing off a little.  He and his wife want to move to Derby to be closer to their 3 grandsons. I  But he wants to secure the future safety of TFS before all that and is working out a plan on who to recruit, and train to take on the mantle of TFS Protector going forwards.

“In the future, I’m probably going to have the role of Sea Daddy.  That’s the guy in the Navy you get buddied-up with when you first start, who helps you get your sea legs.  I want to do the same thing for the next person in charge of all this stuff for TFS. Help, guide, and support them carry on all the great work we’ve done to date.  I’ll be comfortable with that.”

And so will we David.