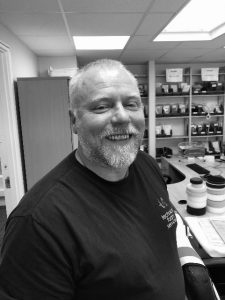 ontinuing our series on looking at what it feels like to work for Technical Foam Services, the UK’s best and most trusted foam conversion business (well, in our opinion anyway), Andy Goram from Bizjuicer, sat down with our Technical Salesman, David Proctor.

The first thing I notice as we sit down is the oversized tea mug that David is cradling.  It’s a fine representation of Chewbacca, from Star Wars.  Do you know how people always say that owners always look like their dogs?  Well, that doesn’t really apply here, the beginnings of a lockdown beard fall well short of the famous Wookie’s locks, but it turns out David is just as loyal as man’s best friend but much better at selling foam.

David is from Northern stock.  He was born in Northumberland, in Morpeth, and is the son of an arable farmer.  What is it with the link between the sales team at TFS and farming?!  Anyway, whilst as a young man he was keen to support the family and join them on the farm, he was encouraged to “Go and try something else first.  Find something you love.  We’ll always be here if that doesn’t work out.”

With that in mind, and not really knowing what he loved, he went to the then Trent Poly to study Business. “After all,” David jokes, “that’s what you study if you’re not sure what to do.”  He did well in his studies and following “the milk round” (for younger readers, this is when students were introduced to a succession of potential employers following the end of their studies) he was wooed by Beaver Foam, in Alfreton, a specialist furniture foam converter.  Hired as a management trainee, he was given a broad introduction to all the areas of the business, but not the keys to the executive bathroom.  It was here David got his grounding in all things foam.

From there he moved to Custom Foams when the then boss at the time wanted David to give “the dodgy guy” in sales a hand.  This is where David first met Duncan Geddes, who turned out to be not-so-dodgy after all.  They formed a formidable team.  Duncan was great at spotting opportunities and David was great at nurturing the relationships and providing technical support.  Over 10 years David learnt a lot about foam and how to build, strong, long-lasting relationships with customers and suppliers.  But at the end of the 10 years, following a takeover by British Vita, the dream team was split up and they went their separate ways.

David was headhunted by Recticel for a business development role.  But a year in, something didn’t feel right.  The culture was very different and whilst he tried to sort out or solve issues himself, he felt the problem was too big for one man to solve.  It wasn’t that it was particularly bad, but it just didn’t match up to his own value set, so he moved on.  At this point, Duncan was at Foam Techniques and he reached out to David to fulfil another business development role (there’s a theme emerging here…).  David worked for Foam Techniques for 18 years.  It had a great culture, great ethics and it just worked.  People there worked hard and took the business from about £3m turnover to £10m.  It was hard, but what a ride that was.

It’s hard when companies make that sort of transition, not to lose that culture that’s made them great places to work.  “We landed a big new client, Whirlpool, at the time,” David recalls.  It was just the platform the company needed to push on, with the people it had.  Things remained good, even with the big growth and with guys like Duncan moving on.  David worked there for 18 years all told.  Then around 2017/18, Avon Group an £80m turnover business bought Foam Techniques, then a £10m turnover business.  As the smaller business was consumed, once again David began to get that uneasy feeling.  As they adopted the processes and ways of the bigger, more formal business, David felt more and more out of place. “I tried to stick it out and remain loyal, but I just couldn’t do it.”  David goes on to explain how these changes knocked his confidence in a big way.  He’d been used to building and nurturing relationships with customers and suppliers, where you gave people a bit more latitude with things like payment and timings.  That all changed with the new way of doing things and made it harder for David to do what he did best.

“Looking back, it’s easy to see now, that I absolutely thrive when the business’s values and behaviours, match up with my own.  Everything is easier.  We’re all pulling in the same direction.  But when that isn’t the case, it just doesn’t work for me and I become a shadow of what I’m capable of.”  I’ve read a lot of business books over the years, but what my approach basically boils down to is to try and be decent, honest, friendly, and straight-forward.  I couldn’t sell double glazing.” he jokes. I get the sense from David that trust is a very important trait in his life, both from being trusted and trusting in others.  He likes to feel part of a team, who all share the same ethics and passion for what they do.  There’s a desire to be consistent in that approach too.  This is why when Duncan Geddes approached him about “getting the band back together”, he jumped at the chance. 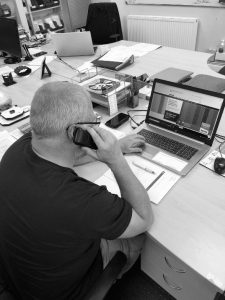 I ask him what it felt like to be on the inside of TFS for a change, “It’s funny,” he says, “when I was on the other side, TFS went a bit under the radar.  We thought they did a few car polishers, some print rollers and that sort of thing.  But they were into acoustic foam, medical foam, packaging foam, sound-absorbing foam, filtration foam and melamine foam too. Clearly, we really had no idea!”  David describes the moment Duncan walked him around the Corby-based factory before joining.  He was pleasantly surprised to see the upgrades to the factory and the range of materials and products being manufactured. His immediate thought was “I can really do something here.”  In the time between previously working together, Duncan had taken the best bits of the past companies to make TFS into the success it is today.  The best bit for David was that they’d managed to keep that personality intact, whilst growing.

When David came for a visit before accepting the role, he wasn’t sure what to expect.  But an old mentor once told him, “You can tell a lot about a business by the state of the toilets.”  They were immaculate.  It clearly showed a level of genuine care for the employees, as did all the other added extras like the tea and coffee, the fresh fruit, the pizza, the TFS t-shirts and gilets, and other bits. “It just stood out as very different from previous places and you could tell the team appreciated it”, he said.

“I think coming to TFS has helped me find my sweet-spot”, David shares. “We have a cracking range of products, good processes, unbelievable amounts of technical experience and expertise, and a very positive, “can-do” attitude.”  He describes how they always find a way to get to the solution for clients.  “It’s often like the bridge of the Starship Enterprise here”, he says animatedly. “You can hear Tom, the Engineering Manager, shouting “the engine can’t take any more captain, she’s gonna blow!”, but we always find a way.  It’s a very energising environment to be a part of.”  This story now explains the Chewy mug.  David is obviously a keen Sci-Fi guy. Don’t get him started on Terry Pratchet’s Discworld series unless you have a decent amount of time of your hands.  His passion for the topic is infectious (and I now have a book on order with Amazon!).

Joking aside, the environment is a constant theme in our conversation. “People get a lot of support here”, he says. “And it really comes with benefits.  I know how I feel, but I see people here, that I’ve worked with, in the past, who are at least 50% more productive now, because of the positive environment we have here.”

We’re nearing the end of our conversation, and as seems commonplace in my chats with the TFS crew, he offers me a throw-away comment that I think ends up perfectly illustrating the consistently, caring and supportive attitude the company takes with its people.  David’s Dad, the farmer, is nearing 75 years old.  Whilst David describes him as a “Strongman” he’s concerned about his ability to cope at harvest time.  When he mentioned this to Duncan in a conversation, it wasn’t long before he was told to “do what you need to support him”, without there being any impact on his job.  The result is that David feels better, his Dad will get help and Duncan retains the work, commitment, and loyalty of a valued member of his team.  Everybody wins. 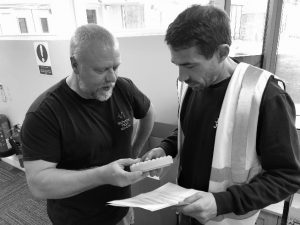 As TFS continues its growth journey and reaches that difficult point where the culture that got it to this point, can fall foul of new work pressures, it’s great to have people like David in the team.  They’ve been there before and seen it from all sides.  He’s seen the pitfalls and opportunities of growth and can help the team avoid the mistakes of the past and still grab the prospects of the future.  In my opinion, David embodies the personality and strong spirit of team, collaboration, bravery, and having a go that is so synonymous with TFS.  It’ll be interesting to see what David can achieve in the next 15 years at TFS, based on his current level of “fit” and his pattern of loyalty over the years…