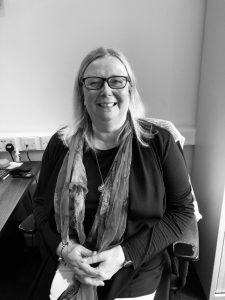 Continuing our series on looking at what it feels like to work for Technical Foam Services, the UK’s best and most trusted foam conversion business (well, in our opinion anyway), Andy Goram from Bizjuicer, sat down with Gina Plowright, the face of HR and Credit Control.

The first words to come out of Gina’s smiling face are, “I don’t really know how you are going to write something about me, there’s not that much interesting about me.”  This is typical of Gina’s quiet, unassuming personality, but it very much underplays the role she plays in TFS’s on-going success, though she’ll never tell you that herself.

With 32 years’ work experience under her belt, Gina knows a thing or two about organising and looking after people at work.  Before landing at TFS in 2004, she previously worked for the Magistrates Court – taking money and payments, but found that place too processed and restrictive and she craved more freedom to express herself. She found her opportunity to do that working for Brian Coles, Structural Engineers in her role as Secretary to the boss himself.  But just like her role at TFS, what started with one list of tasks, soon developed into a whole host of additional responsibilities.  This has been the theme running through Gina’s career.

If you ever have the chance to visit the bustling factory on Burkitt Road, Corby, it’s Gina’s warm, welcoming face that will most likely meet you as you sign in and bid you farewell as you leave.  But you can be sure that during your visit, Gina will have worked across a myriad of tasks at the same time you’ve had a coffee and some biscuits.  Biscuits that Gina will have probably laid out for you.  This multi-tasking effort has been part and parcel of Gina’s journey with TFS and is one of the reasons things are very different today (in a positive sense) than they were pre 2006 when the now MD, Duncan Geddes, and his then business-partner took over.

“We were all under the threat of redundancy back in 2006”, Gina recalls.  TFS was a very different place back then.  Sales and customers were thin on the ground, we had just 2 operatives in the factory and things looked pretty bleak for the Midlands-based foam converter.  “But then, after the takeover, I know it wasn’t overnight, we just seemed to get busier, really quickly.” Amongst Gina’s responsibilities was running the payroll. “This didn’t really take up much time with just 2 people on the factory floor, but as we took on more work, we took on a lot more people and the payroll took up more and more of my time.  I sat there one day and thought to myself – how did we get so busy?” “And things have continued much in the same way since then”, she laughs. 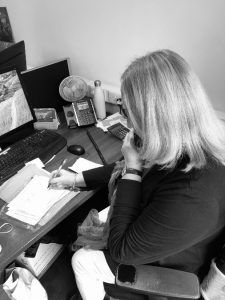 Change and progression have been a constant within TFS since 2006.  I ask Gina if she can recall what it felt like during the early years of the new management.  “It was a really exciting time.  I even got a window!” Gina says.  “What do you mean, you got a window?” I ask.  Gina goes on to tell me that her original “office” was really a converted storeroom, with a hatch in the wall that people could use.  It didn’t even have a window.  Gina knew good things were happening across the company as “we were investing in people and machinery, and that’s when I got a window! I thought, now we’re going places”, she jokes.

The company was growing fast and this meant that everybody had to muck in and just pick things up that needed doing.  The legacy of that small business that’s growing quickly is still alive today when you look at the range of things that Gina looks after today.  “I love the variety that my job has.  No two days are the same.”  Variety is a good word to describe the areas Gina has responsibility for. There’s payroll, HR, credit control, the EDI process for Tesco, holding and managing the company credit cards, data management, and perhaps of most interest to the employees – holding the key to the bonus calculations!

Gina’s also in charge of what she calls “Gina’s Boutique”.  “I look after the uniforms, so I can often be found measuring people up for a new piece of clothing.  I don’t make alterations, so I’m not registering to appear on Sewing Bee any time soon, but I do like to make sure people feel comfortable and that it all fits and looks nice.”

There’s a real focus on looking out for and looking after the employees at TFS.  That’s something that Gina’s very quick to focus on during our chat.  “We have a lot of employees from Poland, who when they arrive often need help sorting out things like tax, or housing and suchlike.  If I can make all that easier for them, it gives them less to worry about, and means they’ll be happier here and stay longer.”  Employee turnover is very low at TFS, which suggests that approach is working, but Gina reminds me it wasn’t always that way and puts it down to the genuine care for employees which is at the heart of TFS.  “We try and do extra nice things for people here too”, Gina says as she washes some fruit and arranges it nicely in a basket in the break room (it’s fresh fruit Wednesday after all).  “We’ve had trips to the Winter Wonderland in London, offered employees complementary therapy sessions, organised social meet-ups and all sorts of things over the years”, she recalls fondly. 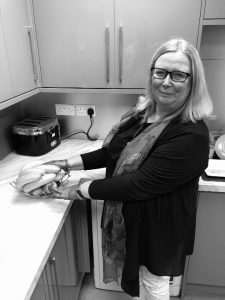 But the support Gina provides doesn’t end there.  Gina is a keen traveller and this wanderlust also means that Gina is TFS’s very own travel agent too.  Being an international business now means that there’s are quite a few overseas travel arrangements to sort out.  Sorting out flights and visas to places like China or India to visit suppliers and customers, is all part of Gina’s bag.  The European trips to places like Germany used to be relatively easy to organise, but Gina thinks that might be a little trickier post-Brexit.  The upcoming European Foam Expo in Stuttgart in November will be the first test of that theory.  Travel ambitions for Gina are a little further afield and post COVID-19 restrictions she’s looking forward to planning a trip to India, where she’ll be looking to take that classic picture of the Taj Mahal for her photo album.

Looking ahead to what’s next for TFS, Gina takes some time to think about how to answer this question. “We’ve had this constant thing here about looking at our performance and thinking, how did we get here?  It’s amazing when you look back at that time in 2006.  It’s just so different now.  But it doesn’t seem to stop.  We just keep on growing.”  “So, I hope we just keep on doing what we’re doing for our customers and our people, because it seems to be working well.”