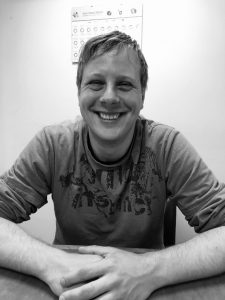 Continuing our series on looking at what it feels like to work for Technical Foam Services, the UK’s best and most trusted foam conversion business (well, in our opinion anyway), Andy Goram from Bizjuicer, sat down with Production Operative, Grzegorz Kurczak.

Have you ever had that experience when a smile enters the room, before being swiftly followed by a person?  Well, that’s what happened to me as I sat down, ready to have another conversation with one of the personalities that make up the TFS family.  Grzegorz (pronounced Gree-et-check), enters the room with a huge beaming smile.  A smile that starts with a brilliant shine in the eyes and goes on to prop up the cheeks with a wide, grinning mouth.  It immediately gives off an infectious feeling of warmth and I already feel connected to Grzegorz and we haven’t even spoken yet.

Like many of his colleagues, Grzegorz came to England in search of better job prospects, based on the experiences of friends and family who’d come before him.  Family means a lot to Grzegorz and it’s the first subject we discuss.  He describes himself as “not a typical boy” growing up.  I ask him what he means by that and his reply is, “Well, I liked to cook, a lot.”  He recalls happy childhood memories in the kitchen with his grandma, tasting and cooking lots of different foods.  Whilst his mates were outside playing, he was learning the secrets of family recipes and perfecting his own.  His love for cooking stayed with him throughout school and eventually went to Technical Gastronomy School in Poland, where he studies to be a chef.  After college in 2006 he came to England in search of work, which was so hard to find in Poland.

Arriving in Corby, the closest the 21-year-old was able to get to a professional kitchen, was working for Orchard Foods, preparing and working with tonnes and tonnes of fruit.  Put a pineapple in front of him today and stand well back, as he’ll have it peeled, cored and chopped in the blink if an eye. Whilst it may not have been his ideal cheffing job, he had good fun there and found a strong, supportive Polish community around him, which helped him with his English.  Which, of course, despite his protestations, is excellent.  “Learning English at school in Poland does not prepare you for real English when you get here,” he says.  He goes on to explain that the “posh” English taught in schools is like a different language compared to how people really speak here.  But believe me, he has nothing to worry about.

He came to TFS in 2012 on the suggestion and recommendation of a friend.  He describes a very different size of business to what TFS is like now.  “It’s changed so much.  I now work on the back shift with up to 10 others.  Back in 2012 that was the size of the day shift!”  I ask him about the changes and what he’s noticed and he feeds back that the two most noticeable changes are the volume of work and the technicality of the work that TFS now turn out.  The technical stuff is something he would know all about, as he predominantly works on the ATOM press – a computer programmed cutting machine that enables TFS to manufacture and cut materials into some incredibly technical and intricate shapes at scale. The most difficult challenge recently was to efficiently cut a delicate rosette shape out of the foam, whilst maximising the number of shapes per sheet.  It took a bit of working out, but it wasn’t a challenge for long and the shapes were soon hitting the quality, volume and efficiency targets. 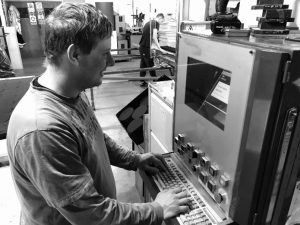 There’s one thing that hasn’t changed in the 8 years that he’s worked for TFS and that is the atmosphere and friendly culture that everybody who works there talks about.  “No-one ever wants to leave here,” he says, “It’s like a family of really good people.”  He makes particular reference to Duncan Geddes, MD, and how he personifies the ethos at TFS.  “He’s kind, generous and treats us individuals.  He knows your name, your wife’s name, your kids’ names, and even your pets’ names!  Nothing is too much trouble and he’s always there to offer support if you need it.”  This isn’t the first time I’ve heard this (or written about this in this series) and just goes to show how real and genuine the culture is within TFS.  Something a lot of businesses would kill for.

I ask Grzegorz what it’s like working on the back shift when everybody else is off work, or in bed.  He says, “It’s great!” and goes on to explain that it really helps him and his wife, Agneaszak, balance their working lives whilst raising their two sons, Nathan (10) and Dominic (6).  If it were even possible, he smiles gets bigger when he tells me about his boys.  Dominic is a big snooker fan and now regularly beats his Dad when they play, but his big dream is to be a famous YouTuber, streaming about his favourite game – Minecraft.  Whilst he’s a little younger, building is clearly a common theme between the siblings as Dominic is a huge Lego fan and loves nothing more than constructing buildings and towers with the plastic blocks. 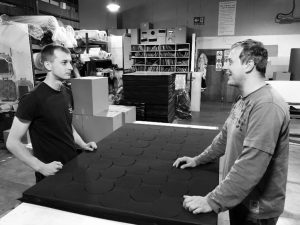 But it’s not just building stuff that the boys are fans of.  No.  Much to Grzegorz delight, they are massive fans of Dad’s cooking.  Which is just as well, as that’s still what he likes doing best of all in his freetime.  The Chef is still alive and well inside him.  He’s still very passionate about cooking and is probably most famous at home for his Bigos. A Polish dish of dumplings, meat and cabbage.  Not everything is always a success though.  A recent dive into YouTube recipes with the boys wasn’t quite so great.  It seems that flour and Nutella, despite what the streamer said, do not make the perfect cookie!  But this hasn’t put him off experimenting and he’s recently created a family favourite by creating a new version of the humble croquette, combining mashed potato, seasoned pork mince, tomatoes and herbs, all formed into a deliciously, deep fried, savoury ball.  The next item on the invention block – chicken.  What will he do with that, I ask him, “I don’t know.  Something good though, for sure.”  I don’t doubt it.

At the end of our conversation, I’m left feeling energised and in the mood to cook something (look out family!).  It’s easy to be cliched about these things, but I’m genuinely enthused by the consistency of the love, yes, love that the members of the team I sit down with, have for the company that they’re a part of.  There’s something very special about it, but when you meet guys like Grzegorz, listen to his experiences and feel his energy, you get a good insight into what’s making it like that.  If you could bottle it up and sell it, next year we’d be millionaires.