Continuing our series on looking at what it feels like to work for Technical Foam Services, the UK’s best and most trusted foam conversion business (well, in our opinion anyway), Andy Goram from Bizjuicer, sat down with Key Account Manager, Hannah Hawken. 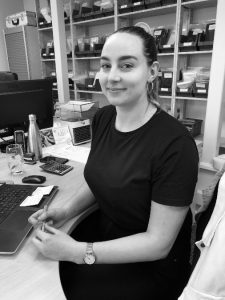 At just twenty-something, Hannah is the youngest member of the TFS sales team.  She’s worked for TFS for 4 years.  In those four years, many things have changed at TFS, but one thing hasn’t; Hannah’s drive to improve and work hard.  It’s immediately visible in her attitude, but not something that she readily talks about.  You have to dig.  But it is there in spades (apologies for the pun).  This work ethic stems from her farming parents and is the basis for her burgeoning career at TFS.

As a student in Cornwall, Hannah wasn’t sure what she wanted to do, so she took the sensible approach to study business at college. “I figured, business is everywhere.  If I got a good grounding in business, it would help me find a job when I knew what I wanted to do.”  Whilst studying, the farmer work ethic shone through as Hannah worked two jobs to generate some income.  Family played quite a large role in Hannah’s early working career.

Her first job was at her Dad’s local pub working in the kitchen and doing a bit of serving.  Pretty much everyone in her family, except her Dad, worked in that pub at some stage.  Hannah’s second job was in a restaurant, where she quickly became the restaurant manager.  This job was originally secured by her Gran, who ate their regularly taking advantage of the “Ladies Lunch” promotion.  She put a word in with the manager, and the rest is history.

Hannah thinks back to those days fondly and says, “I worked with some great people in the restaurant and I learnt all my social skills there.  It was so different from being in the kitchen.  I loved getting to build relationships with the customers.”  “It’s basically where I learnt how to chat”, she laughs.  “And it set me up for the job I do at TFS today.”

“So, why are you working here?”, I ask Hannah. “Foam conversion is a long way from Hospitality.”  “Blimey! That’s a big question to start with”, she jokes.  Hannah goes on to explain that she followed her partner to Northampton, from Cornwall.  “He’s a talented shoe designer, so this is like the centre of the UK shoe universe for him.” She tells the story of how he started playing football with her now boss, Ross Thurlow, who mentioned there was a maternity cover role in the sales office going. “So, I applied and got the job.”  “It was only ever meant to be a temporary thing.”  Four years on, she’s still here – a recurring theme with quite a few folk at TFS.

Starting as Sales Support, the maternity cover time flew-by, but Hannah had still only thought about it as a short-term thing, but then this new opportunity came up.  The business was growing fast, and Duncan and Ross needed to be able to focus on the new opportunities without damaging the relationship with our existing clients that they looked after.  So, the Key Account Manager role was born, and I took it on. “And four years later you are still here, Hannah,” I say.  “I know!” she says, “But do you know what? In all that time I’ve never once had a day when I’ve dreaded coming into work. I absolutely love working with the people here. I love to chat and the attitude and atmosphere here suit that.” 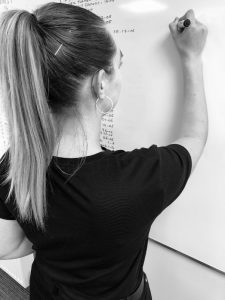 When Hannah started here, she would sit and listen to the team talk about foam types and processes not knowing what on earth they were going on about.  She did not know the materials, processes, job types or even customers at the start.  It was only going to be a temporary thing after all.  But when the permanent position came up a switch was flicked in her head and things started to get serious.

“I like being confident in what I’m doing.  If I feel confident, I know I can do a good job in something”, she says.  “Like, if someone asked me a question about any of the items on the restaurant menu, I instantly knew the answer.  As simple as knowing that sausage and mash come with gravy, I needed to get the same level of confidence with all the foam stuff.”  So, Hannah set about getting to grips with it all.  She never really got any specific training from the team at TFS back then, everyone was too busy, so she made a point of learning on the job.  Following jobs around the factory to learn the processes and speaking to suppliers about foam types. She was like a sponge (something TFS convert a lot of), generally making sure she knew how everything worked.

Just like Hannah, in the last 3 years, TFS has gone from strength to strength.  In the early days, Hannah felt like she was hassling for more work, trying to stretch an hour of real work into a full day.  Nowadays she’s lucky if there’s an hour in the day with slightly less work, but she confesses to loving it.

We’re so much more planned today and customers are so much more demanding. “The Amazon-effect means that customers have come to expect that you order something, and it arrives the next day”, says Hannah.  “But it’s not like that in manufacturing.  There’s more to it.  We have to spec, design, build, test, productionise and dispatch.”  “But at TFS we are probably better than the competition at responding more quickly to customers.  We have to be, or else they’ll go elsewhere.”

A key part of making the TFS engine work with more agility than the competition and keeping customers satisfied, is the relationship Hannah has with Przemyslaw Gorecki, the Operations Manager. As the Key Account Manager, Hannah often finds herself in the middle of the customer and the production schedule.  Her ability to plan and negotiate with both sides has vastly improved over the last four years and means more often than not, everybody wins. “I just hate letting customers down, so I’ll always do what I can to get the right result for everyone” she proclaims.

It’s not just the ability to respond quickly that signals why Hannah thinks TFS has become the go-to foam converting choice.  “We’ve really embraced the access our website has given us to the market.”  “Originally, I was surprised how many enquiries came through the website, but nowadays I handle as many enquiries through live web chat, as I do on the phone.”  “It’s so responsive.  I know I like to use that facility when I’m shopping as it gives me an answer then and there, and it’s the same with a lot of our customers too.” 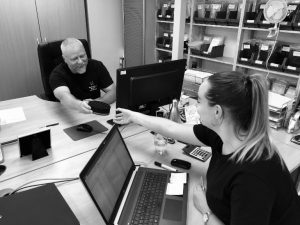 Hannah is someone who wants to do their best and quietly gets on with the job of making customers and colleagues happy.  She gives off a real sense of pride when she talks about what she does and the customers she looks after.  She doesn’t want to let anyone down.  She neatly sums this up by saying, “The better I am at my job, the less bad things I have to deal with and the happier my customers are. And that’s the most important thing.”

It’s clear to me that Hannah is a smart, driven, competent, capable, self-starter.  When we discuss what lies ahead for Hannah, she gives me a funny look.  “I’m really not sure” is her answer. “I don’t want to go anywhere else.  I can’t think of a single reason to.  I’m learning, developing and getting more responsibility.  I’m not missing out on anything. So why move?”, and I can’t argue with that answer.  It’s no surprise to me when I later find out that Hannah has taken it upon herself to start studying for a business degree through the Open University.  She didn’t mention it during our chat. She’s too modest.  But it goes to show that she has real commitment and determination to improve and succeed in her career.

She may be the youngest member of the team I’ve spoken to so far, but her drive, enthusiasm and confidence are exciting to witness.  Hannah is definitely one to watch.