Continuing our series on looking at what it really feels like to work for Technical Foam Services, the UK’s best and most trusted foam conversion business (well, in our opinion), Andy Goram from Bizjuicer, sat down with Processing and Compliance Manager, Jennifer Smith. 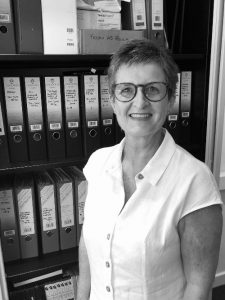 Jenni Smith has worked for TFS for the last six years, supporting the Operations Manager, Przemyslaw Gorecki. Before that, she had a career that traversed various roles across the motor trade, but her heart’s always been in manufacturing.

As someone who has typically been in the back office, supporting the business leaders – and no doubt pulling the strings – she has a particularly good understanding of the processes, plant and people that make up a good manufacturer. There has been a lot of change over the last six years, making TFS what it is today, and Jenni’s seen it all.

When Jenni turned up on her first day, she was met by Duncan Geddes, the now MD. Wearing a very bright shirt (something you have to get used to when working at TFS), Duncan informed Jenni that her manager, the person who’d recruited her, was on holiday.

Despite this day-one wrinkle, Jenni was made to feel very welcome by the team. Duncan offered to make her a coffee – something he never delivered on that day, but we’re delighted to say he’s much better at now – and sat her down to talk through the week-long induction plan prepared for her.

“Back then, we were a very small team and everyone just got stuck into whatever was needed to be done,” Jenni says. “I sat in a single office with four men, doing what men do.” Jenni explained that it was initially quite hard to cope with them all at times, but she soon pulled them in line. Around 18 months into the business that the first big change happened: Jenni’s manager and joint owner made the choice to leave the company. It was a major event for both the business and Jenni.

Duncan Geddes then assumed full control of the business. Even in his early stages, it was clear that he wasn’t content with just “ticking along.” Jenni remembers him talking excitedly about ambitious plans to grow the business and making a real success of it. “The team were all behind him,” Jenni recalls, “because we all felt part of it. We were included and understood our part in it all.” It was the start of a new attitude that would propel TFS to new heights. 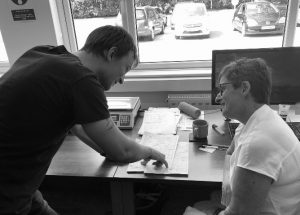 A major change was the emphasis given to generating sales enquiries through the business’s revamped website. “Sales was a major focus”, says Jenni. “We were generating a lot more business, so we saw new people and machines being introduced to cope with demand, almost overnight. We even started an extra shift!” The business was growing faster than ever. But, for Jenni, this exciting time was to take a back seat following a serious personal event.

Jenni’s husband, Jason, was involved in a major accident, where she nearly lost him. Naturally, work was no longer the priority for Jenni. “The team, and Duncan in particular, were so supportive throughout the whole horrific thing.” She goes on to explain that the effects of the accident are still on-going today and still the support remains. In what is perceived as a typical response from Jenni, that enforces her strong, purposeful character, she states: “I don’t like to be a burden and I don’t like special treatment, so I always work extra to cover any time I have off, regardless what Duncan says.” It’s another example of the commitment the people at TFS show each other, every day. Linked to this event, Jenni has been given the opportunity at work to train as a Mental First Aider. This is something that has helped Jenni deal with her own situation as well as feel like a useful aide to her colleagues.

Moving on with the story, Jenni animatedly talks about how her job has changed over the years to cope with the increased demands. “I do a bit of this and that”, she says, completely underplaying her pivotal role in what could be described as the air-traffic controller – overseeing all the comings and goings that result in customers getting their goods on time and in good order. “There’s a lot more traffic in the sky now than six years ago”, Jenni jokes. When asked what it feels like now versus then, she says: “It’s that good-busy feeling, you know? We’re all pulling together to get things done.” Nevermore than now has that been so important. 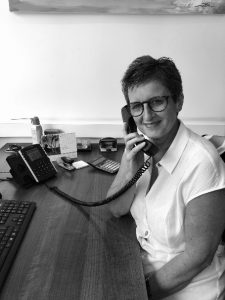 The global COVID-19 pandemic has sounded the death toll for many businesses, but not for TFS. They are one of the businesses that have had to react to an increase in demand over that period, while dealing with all the restrictions imposed. It’s that can-do, team attitude that has made it possible. Jenni says she often gauges how busy they are from the number of conversations she has with Rod and Pete, the Fed-Ex guys. “I text them if it’s not too busy, to tell them not to bother coming to do pick-ups. Just now I’m texting them constantly, asking them politely to please come in! They’ll need an extra crate of beer at Christmas from us to say thanks at this rate.”

In just six years, Jenni’s seen the results of change in the strong growth of a small business. “While lots of things have changed, we’ve still got the same, friendly, family-spirit and good attitude”, she says. We discuss what the future will look like for TFS and Jenni is very clear on that. “We have a really positive future ahead. We have a good plan. We’re generating more sales, better quality work and a wider range of customers. We just have to make sure that as we grow, we get more people who have that same TFS culture in them. If we do that, we can only succeed.”