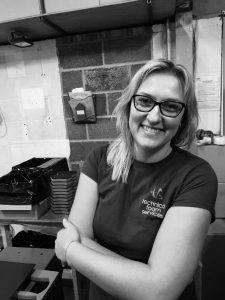 Continuing our series on looking at what it feels like to work for Technical Foam Services, the UK’s best and most trusted foam conversion business (well, in our opinion anyway), Andy Goram from Bizjuicer, sat down with Production Operative, Kintija Cabule.

I’m completely unprepared for the story that unfolds as I sit down with Kintija.  I’m sat opposite a bubbly, blonde lady, who has a captivating smile and a warm nature.  But this happy demeanour is a stark contrast to the journey that she has been on over the last 10 years, and I thank Kintija for sharing it with me.  It’s a story of overcoming tough times, loneliness, rejection, and despair in a foreign country and finding her place and herself in a small factory just outside Corby.

I think it is fair to say that Kintija’s had quite a hard life.  At the age of 19 in Latvia, she was told by her parents to stop studying and find a job.  With prospects for work low, she looked abroad and came to the UK in 2010 to join her mother and find work.  There wasn’t much on offer and the support from her mother at the time was, frankly, lacking.  In a desperate attempt to find work, she was put in touch with a family friend who lived in Corby, who would “look after” her.

Kintija registered with a job agency and begun to pick up short-term factory work in and around Corby.  But whether it was at work, or at “home”, she was not “looked after.”  As a young, inexperienced 19-year-old Kintija felt let down, isolated and vulnerable.  In the following 2 years, she had 8 different jobs, in 8 different factories.  Her experience in these factories was always pretty much the same.  She was looked upon with suspicion by colleagues, abused by managers, and never once made to feel valued.  Working hard got her in trouble with colleagues.  It made them look bad.  It got her more overtime, which helped, but it also resulted in colleagues treating her like she was “stealing” hours and pay from them.  In those 2 years she never once had a friend at work. 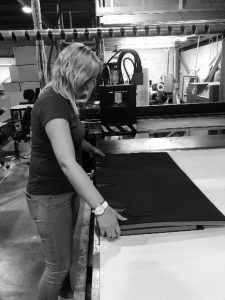 She was in a terrible spot.  She couldn’t really go back to Latvia, she didn’t have any work or homelife stability and to cap it all, she’d just worked her socks off for a company, working all week and the night shift at weekends, only to be let go by text after 3 months.  By text!  Bouts of depression and angst caused Kintija to lose faith in herself and the ability to trust others. I’m shocked on hearing the story that’s laying out before me.  Not just because of how sad it makes me feel, or how disappointed I am in the way that other UK businesses have treated her, but also in the complete contrast between the person being described to me and the person now sitting in front of me.  It’s hard to write this piece, without it feeling like a twee fairytale, because it really isn’t, but things turned around massively when Kintija joined TFS.

In May 2012, she was offered a 3-month contract to work over the summer for Duncan Geddes and the team at TFS.  Kintija was out of work at the time, so the money would be handy, even if it was “another factory job.”  But from day one it was clear things were going to be different here.  “We were allowed to use the female facilities when we wanted. I was so shocked!” she exclaims. “There were tea and coffee and food available to anyone, for free, and people spoke nicely to each other over a coffee in the break room.”  It’s still amazing to me to hear the positive effect that seemingly small things have on people.  The shocking thing is just how different Kintija’s experiences had been elsewhere.

The 3-month contract turned into a permanent job, with security and bonuses.  For the first time, in a long time, Kintija felt valued and began to reclaim a little bit of self-worth.  Kintija explains the positive effect working at TFS has had on her mental health as well as her life in general.  “The atmosphere at TFS is just different from anywhere else I’ve worked.  They really care about us. It’s not just words.  They show it. I don’t think I knew what support was before I came here.”  This feeling of genuine support clearly means a lot to Kintija.  Whilst she’s well on the road to feeling better about life, Duncan and the team have been there for her through bouts of depression and difficult times.  As a young Mum she’s never had to worry about her job if her child was sick and off school, or she’s had to leave early to cover childcare. “It just means I worry so much less than before and I just want to work hard and say thanks for that”, she says.

“The people here are generally really nice.  Not like in other places.  I even found my best friend, Kristine, here”, she tells me.  She goes on to explain that the energising atmosphere means that she’s happy to work long shifts and doesn’t feel tired as a result.  She looks forward to coming to work and getting stuff done. 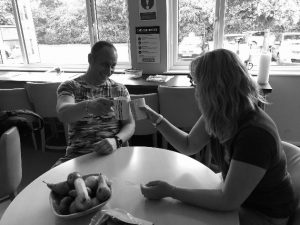 Kintija is in a much better place now.  “Because of my background, I had to grow up too fast, too early.  I didn’t like myself.  I didn’t value myself and I think that’s a big reason as to why I let people take advantage of me.”  “But now I love working here and I’m beginning to love myself too.”  She beams a huge smile as she said this and it just warms my heart.  With this stability now back in her life, it’s now time for Kintija to focus on the future.

“I saw that this company was growing and I thought this was a great opportunity for me”, she goes on to explain how she’s put herself through a Level 2 and 3 Business Admin NVQ, with her sights fully set on getting Level 4.  “I love to work with people and I love to organise things!” she says with a sparkle in her eyes.  The organising bit is evident from her active participation in the company’s Environmental and Social Committees.  But she has bigger plans in mind.  “I would love to move from the factory floor and into the business team, and if I study hard enough, I think that’s possible.”  As I write this piece, I know there’s a good chance of TFS sponsoring her future studies and that she’s been identified as “one for the future”.

As we finish up our conversation, I ask Kintija what the future looks like for her.  She’s very quick with her answer.  “I want to stay here.  I love it here and I want to progress.  I think I’ve found my home and I want to give back.  I still have issues with trust, but that’s because of my past, but every day I get better and look further forward, and working here has played a huge part in that.”

I think that’s a fitting end to our conversation, but certainly not the end of Kintija’s story…