Continuing our series on looking at what it feels like to work for Technical Foam Services, the UK’s most responsive and trusted foam conversion business (well, in our opinion anyway), Andy Goram from Bizjuicer, sat down with Production Planner, Mariusz Lubkowski. 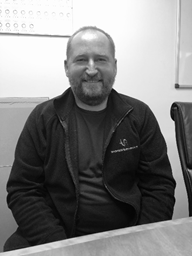 As a child he grew up in a small village in eastern Poland, working on the family farm. Work was long and hard. When the family moved to a slightly bigger village, and took on a bigger farm of 100 hectares, it got harder and for various reasons required him to devote a lot of his time to it. At school he loved to study, and had a real passion for history and politics. To Mariusz the two subjects go hand-in-hand and when connected can tell amazing stories. But responsibilities on the farm and with is family stopped him pursuing that path.

Mariusz explains that his days started at 4.30am to work the farm, before showering and going to school, coming home, doing his homework, working on the farm again and finishing at about 11pm. This is the routine that has brought about a strong work ethic that he’s proud of today. To add to this, he had to look after his 3 younger brothers, while his older brother pursued a career in the army and his Mother went to work in Italy. In the little spare time Mariusz had, he would spend it reading, watching movies and playing any kind of team sport, but particularly football, that he could.

At this time he was working in a packaging and production factory making cartons and boxes. During this time he did his National Service in the Army, where he quickly became a trainer of soldiers, with specialisms in drill work and the shooting range. But he also wrote articles for the Army publications, something that stems from doing as similar job at school, where he fondly remembers writing the end of year reviews. After six years working in the factory he fancied a change. This is where we see a strong trait emerge that has continually shaped Mariusz’s outlook on life. You see, he is what we call a “self-learner”. He’s very happy, in fact driven to push himself to learn and grow, continually. Seeing himself develop, makes him happy. Well, looking after farms and brothers meant he had to fix a lot of stuff over the years. And he was pretty good at it, so whilst in his early 30’s he decided to start his own home renovation business, which he successfully ran for a couple of years – learning new techniques and practices all the way.

But one day, he received a call from a friend who was working in the UK, who told him about job opportunities over here. The timing was right. His brothers could take care of themselves, he was free of ties and he loved to travel. This was apparent when he was in the Army, doing his National Service, where he was asked initially, “Where would you like us to place you?” Mariusz replied, “As far away as you can take me. I love to sightsee!” That took him to the far west of Poland, but this phone call beckoned him to England, and he was a willing traveller. 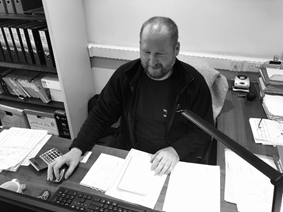 He arrived in Corby, and within a couple of weeks had landed a job as a picker for a Greeting Card business, UK Greetings. 2 years later he was a team leader, but when the company was moving and everyone was asked to re-apply for their job, he took the opportunity to move to London where his partner was. Well, he does love sightseeing, so where better place to go?

Moving to London was a full-on shock to the system. Poland to Corby was big enough, but London was something else. It was 24/7 with something happening or on the go constantly. And what about the sightseeing! His confidence was up and he initially took some catering and waiting jobs to keep them going. He even applied for a job at the top of The Shard, knowing he didn’t have the experience or language skills to get it, but with the chance of working somewhere and getting to see the whole of London in one, amazing view, was too good an opportunity to pass up. But he did land a job at the busy Marks & Spencer at Kings Cross.

This job was great for Mariusz. It was unbelievably busy, which played to his work ethic, they were very hot on learning, he had 8 books to read and learn and he was dealing with customers, lots of customers, face-to-face, every day, which was fantastic for his English-speaking skills (which is brilliant by the way). Living in London was like a dream come true for Mariusz. Whenever he had free time, he was off “learning London”. Not just following the tourist routes, but really seeing how it all connected, learning the stories, and seeking out the landmarks people don’t know about or miss. When he’s telling me about this, his whole face comes alive and I can see we’ve hit on a passion of his. But all good things come to an end, and after about 18 months the job finished, as did his personal relationship of 6 years, and he needed a change of scenery. Another phone call from a friend pulled him back to Corby, but kept him within touching distance of London.

So, in 2016, Mariusz landed back in Corby at the doorstep of TFS, where he started working on the ATOM Press. Yet, another culture shock hit him. From working in the hectic working environment of M&S Kings Cross, he was stood on his own, at a machine in a smallish factory in Corby. He quickly started learning the other machines, looking for opportunities to increase his skills and usefulness. It all felt very different to London, but in a good way. He loved working there because it felt like he was part of a very close, friendly community. He’s never once had that Monday morning dread feeling people sometimes get as they contemplate getting up for work. He felt it’s always allowed him to come to work happy. Even as the business grows and gets busier and busier, Mariusz feels that each day brings with it puzzles to be solved and opportunities to be grasped.

We know by now that Mariusz loves to travel and loves to sightsee. Whenever he can book time off, he’s off, somewhere, either with a rucksack on his back, or a plane ticket in his hand. But it was returning from a break in Grenada, Spain (Mariusz says that if you haven’t been there, you really should go. It’s so beautiful) where Mariusz’s TFS journey took another turn. He arrived back in the UK at midnight and had booked a half-day, so he had time to get home, grab some sleep and then get back to work. Almost immediately when he returned to the factory floor, he was approached by Przemyslaw, the Production Manager, who offered him a job at Production Planner, in the Production Office. Mariusz took approximately 5 milliseconds to consider and accept the offer, as an office planning job was something he’d always wanted to have a go at. And the rest is history. You’ll now find Mariusz happily working out how on earth the process all the existing business and new business that’s flooding through the TFS doors, and keep all their customers happy.

But what’s next for Mariusz? Well, judging by his love of travel, his love of learning, his love of London and his love of sightseeing, I wouldn’t be surprised to see him as London Tour Guide one day in the future, leading a bunch of tourists through the back streets of our Capital City; sharing the stories, insights and wonders it has to offer. I for one, would sign up for that tour.