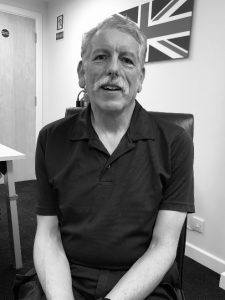 Continuing our series on looking at what it feels like to work for Technical Foam Services, the UK’s best and most trusted foam conversion business (well, in our opinion anyway), Andy Goram from Bizjuicer, sat down with Production Assistant, Richard Dixon.

This series of conversations with the fabulous bunch of people who power TFS has never ceased to surprise me.  I never know what I’m going to find as we sit down and start chatting.  My chat with Richard was no exception to that rule, though it did turn out to have a rather different focus than the rest have so far.  Let me explain.

Richard Dixon started working for TFS 25 years ago.  His length of service for the Corby-based Foam Converter is second only to Engineering Manager, Tom Wallace.  Richard harks back to the old days of TFS when they were based in Wellingborough.  He was around for the move from Wellingborough to Corby and remembers when times were tough and only 6 people made up the full quotient of staff.  He was also there when the new management team came in and turned the fortunes around.

We go over his working history which started in 1978, where straight from school he took a job cleaning and repairing hessian sacks used by companies like Whitworth’s.  His following career has seen him work and fall foul of redundancy across a whole host of jobs, from working in the workshops of Higgs & Hill to managing the stores of a car retailer to working for the council in their parks department and inspecting and managing quality for Supra Commercial Ignition in Burton-Latimer (a business sadly not in operation any more).

The rest, as they say, is history.  History.  A word that is the stimulus for pretty much the rest of our conversation. Most of my conversations to date have focused on the team’s experience of working for TFS.  I always ask about personal interests and hobbies.  As I ask Richard this question, he looks at me animated, smiles, holds up his hand and starts counting out various interests and hobbies on his hand.  One hand isn’t enough. But, I don’t have the time (or article space, frankly) to go through them all with you, so I’ve picked out a few.  It was a really fascinating conversation and what I enjoyed most was the energy and enthusiasm that Richard showed for every one of them.

“It all started when I was young.  We didn’t have a TV.  We were encouraged to entertain ourselves.  So, I just found things to do.”  Richard has been “finding things to do” ever since.  He currently fills his week with a seemingly random bunch of activities and memberships of associations.  But scratch beneath the surface and there’s a historical link to most of them. 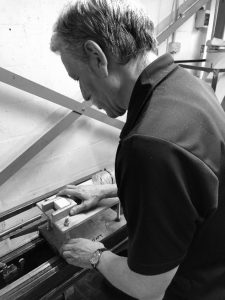 Firstly, on Monday’s he’s the Treasurer of the Wellingborough Archaeological & Historical Society.  Yes, he’s been a right old Indiana Jones in his time. An interest that was triggered by his Dad, also a keen part-time archaeologist when he was just 12 years old.  His specialist subject, “if I was on Mastermind, would be Castles and Fortifications” he proudly boasts.  Whilst the trowels and brushes don’t come out quite as often on digs now, as they did in the past, Richard is still as passionate about this stuff as ever.

On Tuesday, Richard is a deltiologist.  Well, not just on Tuesdays.  He’s always been a collector of postcards.  But on Tuesdays, he helps fundraise for the Northampton Postcard Club.  He has an extensive collection of postcards.  Now, whilst Richard doesn’t have the rarity of a photographic Titantic postcard in his collection, that could be worth up to £200, he does have roughly 30,000 postcards, which he catalogues by theme. I’m not surprised to hear that his favourite collection is of Castle and Fortifications, but his next favourite is of Otters. An interest that came out of the time he spent supporting the Northampton Naturalist Society as a child.

On Wednesdays, Richard is the Chair of the Wellingborough Works Education Association.  This is an association that was set up “back in the day” to help educate some of the more manual workers working across the country, in a wide range of different and interesting topics.  It’s a national network of groups who set-up speakers and lecturers to come and talk about a “glorious mix” of different subjects.  Of late those topics have covered anything from meteorology to ancient food and drink.

On Thursdays, he joins his fellows as an Honourable Member of the Wellingborough & District Camera club.  Photography is a passion that again has been passed down from father to son.  Richard’s Dad used to do photography part-time to earn money by shooting weddings, or product launches. He recalls his house being full of Photographers on a Friday night, using the shed as a dark room, mixing developing fluid in the kitchen and running slideshows in the living room.  It was his Dad’s dedication to his hobby that led to Richard being made an honourable member.  His father was the Chair and his mother was the Secretary of the group.  There is a minute in the Secretary’s notes one night in 1962 that said, “The Chairman announced the birth of a boy, one hour ago.”  The boy was Richard.  His Dad had left his mother’s bedside just one hour after giving birth to honour his commitment to Chairing the group.  The result was Richard being made the youngest honourable member in the history of the group at just one hour old.  I’m not sure I’d have got away with that!

On Friday’s, Richard is the Chairman and Treasurer of the Wellingborough Wargaming Club.  As a child, Richard was always interested in model building, whether that was building kits or fashioning models out of discarded items and rubbish.  His interest in history and in particular castles led to a natural focus on military modelling and toy soldiers.  The collection and painting of miniature soldiers led him to join the Mid Northants Military Modelling Society, which in turn followed in his membership of the Wargaming club.  He enjoys re-enacting real and fictitious battles with his colleagues and can be found simplifying rules of engagement or plotting the next exhibition.  He’s currently building armies of Vikings, Saxons and Normans and is readying himself for the next battle. 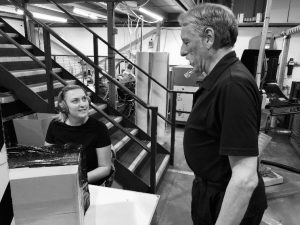 I look at my watch and my allotted time with Richard has long gone and he’s still going.  He tells me of more societies that he’s involved with and how one group leads to another.  His modelling has recently led him to help out at the Northampton Heritage Society, where he’s been educating youngsters on model building, giving guided tours and helped organise exhibitions.  I’m left a bit exhausted by all of this, but amazed at his enthusiasm and energy.  Especially when I mention that Richard does all this with a very serious back and muscle problem. Richard has severe spinal arthritis, which affects his ability to walk and restricts his movement.  He tells me he’s currently 3 inches shorter than he should be, as his spine continues to be compressed.  He cheerfully tells me that he’ll need some more back, hip and knee surgery soon, but that it’ll be a while off yet.  And I’m not surprised, he really hasn’t got time for surgery with everything else he’s got going on!  We say goodbye and as he walks away, he turns around and says, “I never got to tell you about me breading Butterflies and Moths. Perhaps another time?”  What a character, and just one of the many personalities that makes up the unique team behind Technical Foam Services. Who will I meet next?