Continuing our series on looking at what it feels like to work for Technical Foam Services, the UK’s most responsive and trusted foam conversion business (well, in our opinion anyway), Andy Goram from Bizjuicer, sat down with the guy in charge of Sales, Ross Thurlow.

It’s been a long time since I’ve sat down with a member of the TFS team face-to-face to do one of these interviews. It’s a strange feeling to do it whilst consciously keeping a distance between us, especially when I’ve worked so closely with Ross in the past, but that’s the shape of things at the moment. But things are changing for the better and that’s the takeout I took from my conversation with Ross. This is the story of a man in transition, who’s home and work lives are going through similar periods of positive change.

Ross is a Kettering man through and through. He was born there, grew up there and still lives there today. He’s the younger of two boys and has an older brother who’s played a big role in his life, which we’ll get into a bit later. He lives with his partner Lucie and their two children, Maisie (12) and Ted (6). He’s worked at TFS for 10 years this year. “I joined on the 17th of August, 2011” he proclaims in a way that shows that date is forever etched in his memory. But the story that emerges during our conversation, of how he’s got to this point of having responsibility for millions of pounds of sales in a growing business, is one of a journey of personal change and family importance.

Ross did well at school. But at the end of 6th form, whilst sitting on some of the highest grades he took a different path to all his other classmates. He did not apply for University. His journey through school hadn’t always been easy. He’d often felt a little isolated and lonely. But having an older brother who he looked up to and who looked out for him, really helped. As he grew in confidence and made his way through school, he ended up having two sets of mates, those in his year group, and a bunch two years older. Ross reckons this positively influenced his school-life and is what ultimately influenced his decision not to go down the University path.

At the end of 6th form he looked at his brother with a job, car and money, and thought “I want a bit of that.” Interestingly, he mentions that he also felt that he didn’t want to start his education experience all over again, by going to University. Would he struggle with the same things he had initially at secondary school, and could he face all that again? He decided getting a job was the best idea, so he took a role as a Cashier at TSB in 2002. He remembers it was 2002 and sighs, “That was the year that Ronaldinho lobbed the ball over a sprawling David Seaman when England lost to 10-man Brazil in the 2002 World Cup.” It’s another image clearly seared into Ross’s memory. Funny how you connect events and dates, isn’t it?

It wasn’t long before TSB saw something in Ross, and he was promoted to an Account Manager. He was tasked with selling loans, credit cards and similar products. He immediately had an aptitude for sales and showed real promise. But something happened that queered the pitch. The emergence of a new product that the banks wanted to sell – Payment Protection Insurance, or PPI as we now know it. It was a real focus of attention for the bank, but something didn’t sit right with Ross and soon he left and looked for opportunities elsewhere. 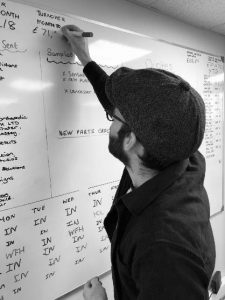 During this time in his early twenties Ross was a very keen footballer. For 15 years or so, it was a huge part of his life. Saturdays in particular where almost entirely devoted to playing or watching football (By the way, Lucie is not a football fan. So, any watching now is at the mercy of whether Keeping Up With The Kardashians, is on. If it is, Ross has to watch the match upstairs. What a change!). As a player he played for and captained a number of local teams to a decent standard, as far as UCL Premiership and Division 1. But as he got older and players around him got faster, he made the move into management, taking the Kettering Nomads from second bottom of the Northamptonshire Combination Premiership to third place and to a cup final.

But the health of Lucie, Ross’s partner, who had always battled with Crohn’s Disease had really deteriorated over the years, and the need and desire to care for Lucie, meant that Ross couldn’t devote as much time to football as his younger self. Thankfully, life-changing surgery has vastly improved Lucie’s health and quality of life. This, coupled with the fact that he was a Dad to two kids meant he now had other priorities he put above the beautiful game. He still plays football today and helps run a veteran’s team on the occasional Sunday now, but providing and caring for his family is where he puts the majority of his energy now.

So, after TSB, Ross looked to his brother for help and advice on his next move, and he took a part-time job with a clothing and footwear distribution company as a credit controller. He enjoyed the chase of the sale and the payment and the part-time job turned into a 3-year fulltime stint, before he made the move to TFS. At the time Ross remembers being sat between the 2 owners then, as the man in the middle of the Sales v Production conversations and laughs and tells me how much he learned from both of them, but how different it is today. 10 years on he’s now the Sales Manager, managing a growing team, with responsibility for millions of pounds worth of business. “That feels like a long way from being asked to flog PPI, back in the day” he says.

Another sign of the transition this man is making. Not unlike TFS itself. The sole owner, Duncan Geddes, is plotting out the continued growth of the business, which started out as a £1m turnover business and now regularly bangs out £5.5 million in sales each year. A huge amount of change has happened over the years, and Ross has been there through the majority of it. “It’s amazing to think that so much has changed, but the one constant has been the culture. It’s a little different from having less than 20 people to close to 50 now, but it still holds on to that family feel, and I really think that’s what sets us apart from other businesses. When I talk to people in other places, they are quick to talk about the negative bits. I don’t do that. It’s not a conscious decision I make, it’s just it doesn’t feel that way here. But it does feel a hell of a lot busier!” 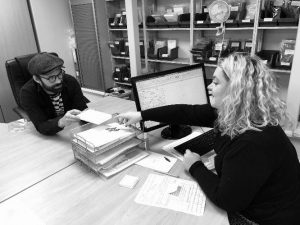 So, “How do you switch off, Ross?” I ask. “Music” is the initial one-word reply I get. Digging a little deeper, this is part of the strong bond that Ross and his brother have, a real passion for music. It stems from listening to his Dad’s choice of music on long car journeys, where the sounds of Pink Floyd, The Stone Roses and Radiohead would fill the back seat. His Mum was a big Motown fan, but she never really got a look in. His Dad would always encourage the boys to “listen to this album” or “check out this band” and now it’s a passion both boys share and are now playing back to him, making recommendations on new bands to listen to. Ross’s own tastes are clearly influenced by his Dad and Brother with Radiohead and The National being two of his favourites.

But like many things, COVID-19 has put a stop to the two boys going to gigs. But on the radar when restrictions lift are trips to see Echo & The Bunnymen and New Order, and the pair are determined to get to a festival before the end of the year. But going to concerts aren’t the only thing that COVID has halted. Lucie and Ross were due to get married last year but plans for that were shelved. But the good news is that the wedding is now planned for 2022, which will mark 10 years of the pair being together, which is nice, and will start another period of transition and change for Ross. That’s something that just goes with the territory for TFS’s Sales Manager and some things he’s looking forward to, very much.