Continuing our series on looking at what it feels like to work for Technical Foam Services, the UK’s best and most trusted foam conversion business (well, in our opinion anyway), Andy Goram from Bizjuicer, sat down with Engineering Manager, Tom Wallace. 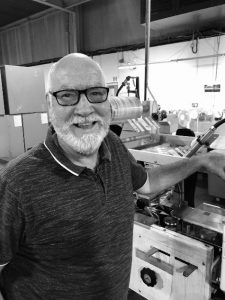 Sat opposite Tom Wallace, not for the first time in my relationship with TFS, I’m faced with a strong, questioning glare and a set of crossed arms.  I can feel Tom is suspicious of what we’re doing.  But behind the front, there’s a mischievous sparkle in his eyes and I know this is going to be a good conversation.  I like Tom.

With 47 years working as an engineer in the foam conversion industry I ask him, straight off the bat, “Are you the most experienced engineer in the UK Foam converting world?”  He looks at me a little puzzled.  “How would I know that?”  Yes, it probably was a bit of a daft question, but by the end of the conversation, I’d conclude that there won’t be too many people, if any, that have the breadth and length of experience that Tom has.  You judge for yourself.

Tom came to Britain from the extreme west coast of Ireland in 1973, on what was supposed to be a two-week holiday to see his brother.  The destination for this break, was the not-so-recognisable-as-a-holiday-town of Luton, in Bedfordshire. He never left.  As he travelled up the M1 from Heathrow to Luton on that first day was that England’s electricity bill must be massive, as he stared at all the bright lights lighting up the motorway.  A far cry from the rural nature of his hometown Gort.

During his visit, his brother convinced him to stay and try and get a job here.  The average wage back in Ireland was £8 a week.  At this time in Luton, where company’s like Vauxhall were in their pomp the weekly wage was closer to £38 a week.  It was a bit of a no-brainer.  A trip to the employment agency generated an opportunity in Potters Bar.  Initially, Tom wasn’t keen on pub work, but when he realised Potters Bar was a place, not a pub, he set off to start work for a foam company called Declon, which later became Recticel, as a sampling technician.  He recalls his first job there was making foam grills for Hi-Fi speakers.  It was here that Tom’s love for engineering began.

Throughout Tom’s life and career, education has played a key role in his development.  He’s always been keen to learn new things.  During his first job, he regularly attended the Luton College of Higher Education where his love for machines and metallurgy grew.  A ravenous learner he completed the 4-year City & Guilds Engineering Craft Practices qualification in just 2 years, balancing 1 day and 2 nights a week with his day job. 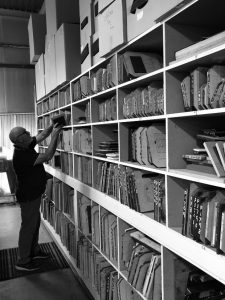 During this time Tom also joined the TA and was a Bombardier for 12 years.  This was something of a coup at this time in history, for a 21-year-old lad from the Republic of Ireland to join up with the British Army.  Something he had to keep quiet from his mates back home.  “What was it that made you do that?” I ask Tom. “I just loved the machinery and the discipline.  They had a simple procedure for everything.  They even had a process for standing comfortably during long speeches!  I just loved it.  I was so impressed with the British Army and I still wear my medal with pride on Remembrance Sunday now.”  Tom’s military background shows through today in his organisation and disciplined approach to engineering.

Working his way up to the position of Research & Development Engineer around ’92, the economy was struggling. One day he ended up looking around and realised he was one of the only engineers left in the company, doing everything but wasn’t considered for management.  It was at this point he took the opportunity to move to TFS in Wellingborough, in  the early nineties.  This brought a massive change in circumstances.  He was moving from a premium engineering set-up, where he had all the tools and kit he could wish for, to an empty shop which he would need to build from scratch.  When he started at TFS, they had one drill and a lathe and money was hard to come by, so he had to be very creative with how he did things.  He remembers fishing around in skips for bits of steel to fashion tools.

This scarcity of materials led him to become an expert in the creation of wooden tooling because it was cheap, easy to fashion, and got quick results.  This is something that created real agility for TFS at the time, and is something that continues to be a real strength for TFS today.  They often win jobs because they can react quicker than the competition and can deliver that most mystical of holy trinities something good, quick and cheap!

But, “the TFS of yesterday is very different from today”, Tom reminds me.  In the early 2000s, Tom remembers a time when there were just two production operators and one machine working on the floor.  The business owners at the time just couldn’t get the jobs in and they decided to sell.  One of the two buyers that day is the now MD of TFS, Duncan Geddes.  “It was amazing”, Tom recalls. “Almost immediately the sales went through the roof.  We started to get loads more orders in.  It was a complete turnaround.”  For Tom, the work snowballed and every day was a long list of tools, jigs, and fixtures that needed to be fashioned.

Tom’s thirst for education continued over the years with real purpose to keep on top of the new, daily challenges from the increased number and range of jobs coming in. He became well-versed in pneumatics, electrical installation, welding, and of course computers, particularly auto-cad engineering and 2 and 3D drawing. 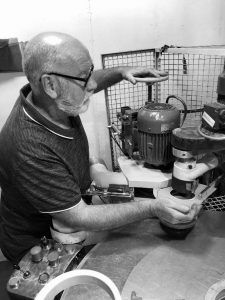 “That’s the biggest change over the last 3-5 years I’d say, the amount of work that now involves computers.”  “Today computerised machinery carries a lot of the load, but there are still many technical challenges that need a human brain and creativity to solve.”  Tom’s eyes come alive and buzz with excitement as he makes this statement.  He’s one of life’s problem solvers. “It drives my wife barmy!” he says, “We can be sitting there watching telly and something will just hit me and I’ll be like”, “Yes, that’s what I need to do!”.

It’s invigorating sitting with someone who’s clearly still so passionate about the work he does. I ask him what keeps him going and he answers, “I love the variety, the people, and the freedom I’m given here to create.”  TFS handles a great deal of variety from highly technical foam conversion to relatively simple, but higher volume jobs.  But freedom for creative people is an important catalyst for getting the best out of them.  I’m sure TFS has benefited from this over the years.  As an example, Tom still breathes life into machines that should have long-since been retired, but his care and ingenuity have kept them running as good as new.  He seems just as excited about this part of his job as tackling a new problem.

“Well you learn a lot over the years, Andy”, he counsels.  “I’ve made plenty of mistakes in 45 years and I’ve seen a lot of stuff happen.  But I’ve always learnt from it and now I try to educate the younger members of the team, so they benefit from my errors.” It’s very evident that he’s still motivated to learn and try new things and pass on that knowledge.  For my final question, I ask him if he has any regrets.  “The only thing I ever ask myself is if I can create all this clever but simple stuff for everyone else, why haven’t I been able to create something for myself that makes me a millionaire?”, he laughs.  Well for someone this experienced, passionate and energetic I think there’s still plenty of time for that, don’t you?