Wieslaw Wyrebek – Carpenter of the People 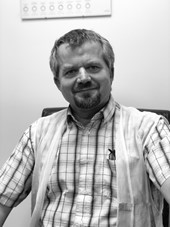 Continuing our series on looking at what it feels like to work for Technical Foam Services, the UK’s best and most trusted foam conversion business (well, in our opinion anyway), Andy Goram from Bizjuicer, sat down with Production Back Shift Supervisor, Wieslaw Wyrebek.

Well, this has never happened before. An interviewee turns up with beautifully hand-written notes outlining their career history. I’m not sure whether this is a reflection of my poor ability to correctly write up the people’s job history in previous articles, or just a helpful gesture. To keep my fragile ego in place I’m going with the latter.

Wieslaw presents a commanding silhouette as he enters the room, but as always, I’m met with a wide smile and a bold and cheery “Hello my friend.” Wieslaw is in a good mood. He eagerly hands me his notes and says he’ll be back in a few minutes, giving me time to read them. Does he not want to have a chat today? That would be a shame. The content fills 4 pages of A4 paper and details out, in strict chronological order, his education and career achievements. But it doesn’t contain what I’m really after. I’m going to have that conversation after all…

Wieslaw is a fiercely proud man and it is with great pride we go over his working history. After graduating technical school in Poland, he went to work for Fiat working as a machine operator. Whilst working in the factory by day, he continued his technical studies by night. He recalls his parents drilling into him, “Carry out everything you do safely, with an eye for detail and with efficiency and it will always be noticed by intelligent people.” This and other family teachings like, “The world likes creative thinking and persistent people,” are words that have stuck with Wieslaw throughout his life and influenced his own attitude to work and the expectations he has of others.

As he progressed at Fiat becoming a supervisor and managers, dealing with new challenges and opportunities, his home life brought with it an equal amount of change. During this time, he got married and celebrated the birth of his son, Sam. At work he became more and more interested in understanding human behaviour as he faced into the challenges of managing people every day. So keen to learn more about this he continued to work and then study Psychology and Sociology part-time, so he could become a better manager. He was particularly interested in how to effectively deal with different personalities. Something that would prove to be hugely beneficial throughout his management career.

After working eight years at a monster company like Fiat, Wieslaw switched gears and went to work for a much smaller automotive manufacturing organisation, EMIX. Whilst he was initially worried about the transition, he thought he would have the opportunity to learn more things, more quickly in a smaller company, and his intuition was right. His career continued solidly for a good few years, moving to new opportunities in new companies, always learning his machinery and people-craft. But one day it all felt a bit stale and at this point his wife and son persuaded him to try something new. New meant leaving them behind in Poland, while he travelled to England in search of better opportunities.

He arrived in Corby in 2006, alone, with no job, no English (just Russian and Italian) with just a room in a house to rent. “It didn’t feel like such a good idea at the time,” he says. It felt like after all his progression that he was starting over again, all on his own and 2000km away from his family. “It was tough, but I thought that I have to and can do this.” He got jobs at Puredrive and Recticel over the first few years and his wife and son moved over to Corby in 2007. Things were on the up and improving.

That is when history repeated itself again. An opportunity to switch from a big company to a smaller one. Well it had worked the first time, could it work again? So, in 2013 he went for a job at TFS that a friend had seen, and he got it. Back then he saw a small company, yes, but he could see that they were different. “It felt like there were great opportunities,” he recalls thinking. “It was clearly growing and there were so many intelligent people working there. You could feel the energy and creativity that Duncan and the management team had. It felt great!” He goes on to describe how much he enjoys working with a younger, energetic team and how much he appreciates the support of his deputy, Kamil. And this is all great, really it is. But I say to him “Something is missing, Wieslaw.” He looks at me confused. “What is missing?” “Well, what do you do outside of work?” I ask. “Ah!” he says, and his eyes light up.

“Carpentry. I love carpentry and metalwork. I also used to have a carpentry business back in Poland.” I ask him what he likes about carpentry. His answer is entirely surprising. “I love the smell of wood. Wood is perfect. It’s like people. Like people every piece is different. Just like people you need to use different tools on different pieces of wood to get the best out of it, and with a little bit of extra care and polish and they both shine.” I sit there smiling. What a beautiful way to describe it and I instantly understand where his fascination with human behaviour and the management of it comes from. Once again, I’m floored by the things that come out of one of these conversations. He goes on to tell me that he just makes things for fun now, though every piece of furniture in his house was crafted by his own hand. You can see the pride in his eyes when he says that. 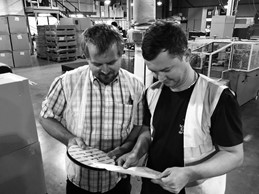 We’re about to wrap up and I ask whether there’s anything else he wants to share or talk about. He’s about to get up and leave and then casually says, “I really like extreme sports. You know? Skydiving. I love the feeling of flying you get from that. But I did that many years ago. That and mountain biking, kayaking and Kung-Fu.” At this point my mouth is still wide open. He does not do that anymore though. His wife says he has too many other responsibilities and it’s too dangerous. So now the weekends are for relaxing. He gets all his carpentry fixes from being in his garage all day. The life of a back-shift supervisor from 3pm to midnight means that he gets very long days to fit in all the things he likes doing, and that suits him and his wife just fine.

On any given evening you’ll find Wieslaw patrolling the floor of the TFS factory, ensuring the team all know what’s required and making sure they have what they need to get the job done to his exacting standards. And like any good carpenter it’s his attention to detail and care for the raw material that’s at the heart of a great product, and at TFS great people, make great products.

We like to think of TFS as the UK’s best and most trusted foam converter. You can find out more about us here.