Continuing our series on looking at what it feels like to work for Technical Foam Services, the UK’s best and most trusted foam conversion business (well, in our opinion anyway), Andy Goram from Bizjuicer, sat down with Second Shift Assistant Supervisor, Kamil Cichy. 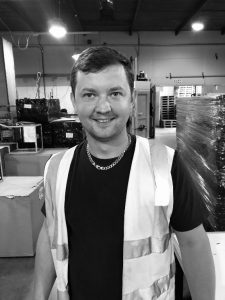 At 33 years old, Kamil has the look of someone 10 years younger.  But don’t let his youthful, some might say, baby-face fool you into thinking he’s anything less than a hard-working family-man, because that’s exactly what he is.

Kamil came to the UK in 2010 after finishing his studies in Poland.  Like many of his compatriots, he came looking for work, striving for a better standard of living, and was ready to work hard for it.  He started doing agency work which originally sent him to work in the Housekeeping department of Corby’s Hampton by Hilton.  He worked there for 3 years and is where he met his now-wife, Kate, 7 years ago.  Agency work then took them both to RS Components, where Kamil stayed for 4 years and where Kate continues to work today.  But with the birth of their first daughter Hania, Kamil was desperate to get a longer-term contract with the agency, but it wasn’t forthcoming.  In searching for a job with more stability and security, that’s when he found out about a position at TFS, from friends who were already working there.

Kamil started working at TFS 3 years ago.  He recalls speaking to a few friends before he started work for the Corby-based foam converter, who described TFS as a place “where the people were good and friendly.”  As we chat about the early days Kamil constantly apologises politely for his “poor English”, which is completely unnecessary as it’s rather good.  But this signifies a gentle humility which is evident in Kamil.  He has a very gentle nature and way about him.  I’m interested to find out more about him and his role as a second shift supervisor.  I’m particularly keen to understand how this apparently soft nature plays out when managing operatives on the second shift.

Kamil supports Wieslaw, the Production Supervisor.  They are the Batman & Robin management team of the second shift.  TFS’s production schedule requires a second shift to cope with demand these days, and the men manage the team that pulls the 3 pm to midnight run.  It’s clear from watching them that there’s a good cop, tougher cop dynamic here, where Kamil’s softer edges smooth out Wieslaw more commanding presence.  It looks to work very well.  “Wieslaw chose me to be his number two and I don’t want to let him down.”  There’s clearly a strong bond between the two of them. 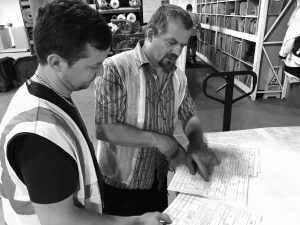 Kamil strikes me as a very committed and loyal individual.  He makes it very clear to me that the stable environment offered by TFS, along with the strong sense of working in a bigger family is very important to him.  He’s very happy in his work.  One of the benefits of working for a growing company like TFS is the volume and variety of work that comes in.  “Every day is different, which is not always the way with factory work”, Kamil says.  He goes on to explain that it’s never boring at TFS and the relaxed atmosphere on the factory floor promotes a fun, but safe working environment, where people are happy to do their work, which makes his life easier most of the time.

Whilst working for TFS feels great and Kamil doesn’t want to work anywhere else, it comes at a price.  During the week, his shift pattern means that he only gets to see his daughter Hania for just one hour a day on the morning school run.  Kate works the day shift down the road at RS Components, so between them, it works, but it’s clearly a tough thing for Kamil to deal with. “But you have to do, what you have to do to support your family.”  At the end of the day when Kamil gets home, Chanel the Yorkshire Terrier is there to meet her Dad and show him some love and Kamil says that she’s definitely a Daddy’s Girl.

Come the weekend and it’s all about rest and relaxation with the family.  Kamil loves to play football with his friends when he gets the chance but can also be found sorting out the plants in the garden or taking a walk with his adoring Chanel. 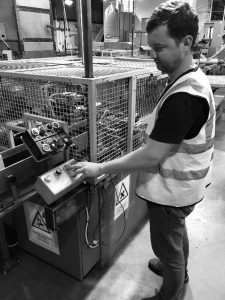 I’m struck by the recurring theme of the importance of family, a strong sense of pride and commitment to doing a good job that you see and hear from the team at TFS and Kamil is no different.  When I ask him what the future holds for him, he gives me a warm smile and simply says, “I just want to do a good job, be a good man and look after my family.  After that, we’ll see what happens.” And you can’t say fairer than that, can you?